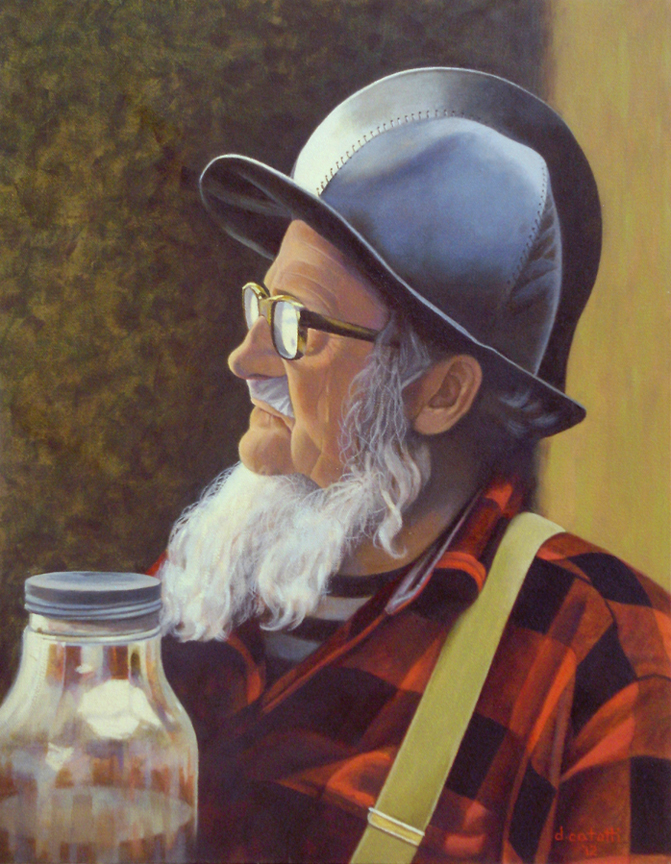 When I worked on the Salmon River in Idaho in the late 70’s, our boats would often stop at Buckskin’s place, and I would sketch him in my book as he regaled the crowd with his back to the land stories, a show and tell of a mountain lion fetus in a jar, guns and cannons he had machined himself, garments he made of bearskin, and other unusual items.  I knew I wanted to paint him some day, and while I did not carry a camera in those days, a friend loaned me a photo that I carried around for many years.
Sylvan Hart (1906-1980) was the first of six children, born in Oklahoma when it was still a territory.  Son of a ramblin’ gamblin’ father, he started hunting at age eight to help feed his siblings.  During the early 30’s in the depression, he and his father sought a place where they could live off the land.  They ended up at Fivemile Bar on the Salmon river, and Sylvan stayed on when his father eventually left. Sylvan had a college degree in English, he loved to read, and he was amazingly resourceful.  He collected copper ore from the mountain side, smelted it and made himself a lovely Russian style samovar.  Buckskin Bill, as he became known, grew or killed all his own food, save a bag of flour and sugar each year, and the tea he was fond of.  He fashioned his clothing and footwear from the skins of animals, bore the stock of his rifle with a simple self-made tool that he turned by hand.  In the 70’s the forest service threatened to remove him from the land so they could “protect” it.  His response was to build a stone fort, complete with cannons which he promised to use, directed at the river.  The officials decided to let him live out his life there as a sort of back-to-the-land living museum piece.
“For the city man, life is just a jumble, like the facts in a college freshman’s notebook.  But you can ask me anything about nearly anything, and I can answer because I’ve had time to think about it.”
“A man should have some kind of ideal to pursue.  Like independent poverty.”